I am a big fan of mystery and magic. I want our children to grow up unafraid of the unknown, even relishing it. When my daughter asked me to write a murder mystery birthday party for 12 of her closest friends, I responded too quickly, “Of course!” Here is a brave over perfect opportunity! 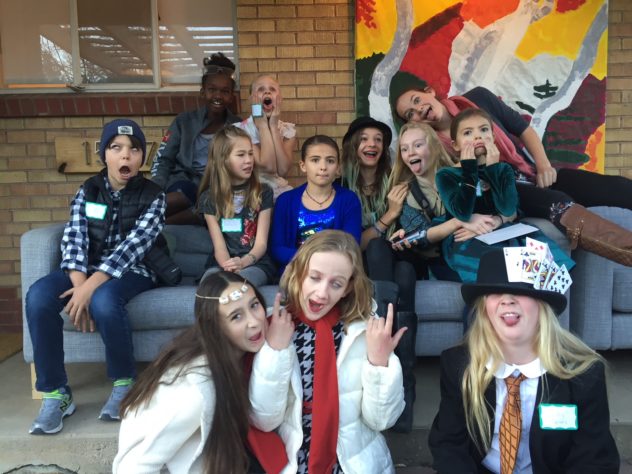 I’ve never written a murder mystery. I’ve never been to a murder mystery party. And the last time I watched “Murder She Wrote,” I had feathered hair and wore blue eyeliner, which is to say, a long time ago. Then I thought, this is not brave. This is stupid.

“How hard can it be?” Those words are my equivalent of the ill-fated phrase, “Hold my beer. Watch this.” They should send off alarm bells and flashing lights in my head. But not this time. Our daughter was turning 12 on 12/12. It felt big enough to do something special. I went online to see if I could buy my way out of this promise. But she caught me.

“But I don’t know anything about murder mysteries!” I protested.

“You’ve got this,” she said, and patted me on the shoulder. She deliberately used the same words I say to her before every test and dance performance. And she knew that I prefer to fight boredom with “stuff to do with stuff there is” rather than to buy entertainment. She had me. I had to lead by example.

How’s this for leading by example? The night before her birthday, I went to my husband’s work holiday party and drank too much. We stumbled home and I couldn’t imagine working on the murder mystery. So what did I do? Instead of going to bed, I stayed up and watched Guardians of the Galaxy II, a long movie, starting at 11pm. With the kids. So everyone went to bed after 1 in the morning, a brilliant set-up for hosting a complex party the next day. 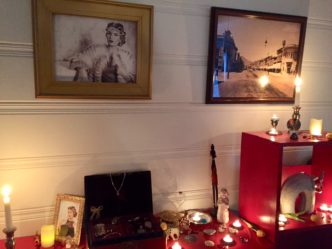 I woke up at 5 in the morning to finish the script. What came out was a mix of an escape room and a murder mystery play. The premise was this: The Duchess of Cantabarre dies a mysterious death and the guests are invited to her manor for the reading of her will. The guests were told ahead of time about their characters and encouraged to arrive in costume. They had to work together to figure out who killed the Duchess, why, and with what weapon. No one knew who the murderer was, not even the person who did it. To “unlock” the clues, they had to overcome challenges. Some challenges were easy: a hidden word search, and others were hard: a web of symbols and string to open a mysterious lock box. 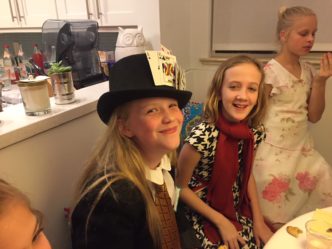 The night of the party, I could have used earplugs. There was a lot of shrieking. At one point, we brought out a rope to play a team-building challenge called “All Aboard.” The girls screamed the minute we brought out the rope.

“Are you going to strangle us?” They shrieked.

The kids had a great time. I was exhausted. If I were to do it again, I’d make it looser, and leave more space for the guests’ creative, imaginative ideas. I was too concerned that it wouldn’t work, that something would go wrong. I forgot the first principle of mystery: trust. Instead of thinking of what could go wrong, why not imagine what could go wildly right? The kids didn’t solve the mystery, but they loved the challenges and the surprise ending. 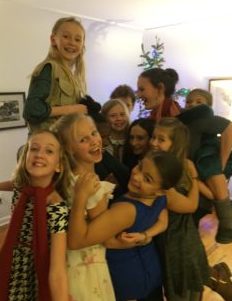 I can’t help but make a connection between the mystery party and this crazy experience called life. It’s easy to get scared facing big uncertainties. We worry that that there isn’t a next clue, or if there is one, we’ll miss it. But I’m here to tell you what I told my daughter when she was nervous during the party: There will always be a next clue, and you will always find it.

I believe that if you live with bravery and deep trust, then life becomes an adventurous game that is our privilege to play. All we can do is move bravely from clue to clue and love the surprises and mystery.

I forgot the second principle of mystery, too: slow down. It’s so easy to get caught up in the busyness of making magic happen. But magic occurs when you take the time to soak it all in. After the party, Hazel and I lay on the couch eating cookies. I breathed in and out, and finally relaxed. I noticed how big she was, next to me. And I thought about how tiny she used to be. She has grown so much, and yet she still wants to lie next to me on the couch. That’s worth celebrating. Only, I think I’ll keep things simple next time.

Want to find more joy and fulfillment in the New Year?

It’s not to late to join our Brave Over Perfect coaching group! Our next live call is on Wednesday, January 10th. That gives you plenty of time to listen to the call recording where we laid the foundation for setting goals and thinking about changes you’d like to make in 2018.

Our Brave Over Perfect coaching group is a highly effective and extremely inexpensive alternative to life coaching and, for some people, therapy. If you’re interested in personal growth, this is less a lot less work than reading a book (and at only $20 for three calls, it’s totally affordable).

When I was younger, I wanted a mother who was sweet and nurturing, who baked cookies, and who welcomed my friends with cheerful holiday decorations. What I got was a mother who raised us well, but without softness, and who baked so rarely that she kept a heavy chair in front of our oven door. On Halloween, she turned off the lights and left a bowl of toothbrushes on the front step. At Christmas, she hung a tangled strand of lights on a house plant and called it a day.

My favorite picture book was “Are You My Mother?” It’s about a bird who falls out of the nest and goes looking for its mother, asking the cow, the hen, even a bulldozer if they are her mother. Growing up, the book was an inside joke between my mom and me, because I always felt so different from her, and she knew it. I was a little hippie girl and she was more like a Spice Girl. I lay on the floor and listened to Bob Dylan while she moonwalked to Michael Jackson. She was messy and I organized everything. She seemed to be care free. I worried constantly. She had clear boundaries, I ran ragged trying to keep everyone happy. When I read that the legendary folk singer, Joni Mitchell, had given up a daughter about my age for adoption, I fantasized that she was my real mother. I imagined the warm embrace when we finally met, and the cover story in the newspaper. There would be a picture; Joni with her guitar, Susie with her ukulele, and we’d be sitting under a tree, smiling. The headline, “Mother and Child Reunion.” Basically, I just wanted my mother to be different than she was. Doesn’t everybody?

Now that I am a wife and a mother myself, I appreciate that my mother was never conventional and always 100% herself. One of my mom’s best friend’s described her as, “often wrong, never in doubt.” And my mom laughed. That is the thing about my mother: she can laugh at herself easily, joyfully. Just last week we were trying to carry a suitcase down a flight of stairs and when we realized that we only had 1 good arm and 3 good legs between us, she started to laugh, and then I laughed, until the two of us were laughing so hard that I peed—just a little—right there on Boston’s South Station steps.

The first time she came to see me post-surgery in Boston, I wanted her to help me prepare meals, do laundry, clean up. When she arrived, she set down her hot pink bag and declared, “I don’t cook. I don’t do dishes. Never have. Never will.” Instead, she made me swallow monster gummy multivitamins, get my hair styled, and do exercises that she had seen the Olympic rugby teams do on TV. I was frustrated; I kept wanting her to be better at this nurse stuff, and know exactly what to say and do. I wanted her to be different.

It was the same as when I was a teenager in the house. While I raged at her shouting, “Why can’t you be more like other moms?” I missed what she was demonstrating to me every single day: how to be authentic and real. Be yourself! Her actions screamed. And I missed and missed and missed the memo. When my parents divorced, I was just a baby. I never knew what it was like to have two parents under one roof. Somehow, I blamed my mother for the divorce. If she had only been a little more like the other moms, I reasoned, he would still be around. I vowed to be different when I grew up. And by different, I meant the same as others. I reasoned that if I acted a little less myself and more like other women, my prince wouldn’t leave. But the consequence was that I gave up my uniqueness in order to fit in and not rock the boat. Even when I realized that I was holding my mom to impossible standards, I didn’t realize it enough to stop holding myself to those same impossible standards. I worked to maintain my status as the good daughter, the good wife, the good spouse, the good mother. I managed others’ needs and feelings to the detriment of my own to the point where when my husband asked me what I needed one day, I had nothing to say. I had no idea.

When my mom came to visit me last week during my radiation treatments, we had wonderful days together. This time, instead of just wishing she were different, I spoke up and asked her directly for what I needed. She listened and responded. When I wanted privacy, she took my phone and guarded my door. When I wanted to go for a walk, she strapped on her squeaky running shoes and led the way. When I was hungry for breakfast, but too tired to get out of bed, she made me porridge. And this time, she only destroyed my host’s stovetop once. All week, I was relaxed and able to appreciate my mother for who she is, bold and brave. I was also able to appreciate myself for who I am, curious and courageous. We are more similar than I thought. This helped me to finally accept that Joni Mitchell is taken; the tabloids say she is reunited with her daughter in a California suburb. That’s OK. I hate suburbs. Plus, I think I am the lucky one. My mom may never be a great nurse or maid, but she can lift me out of my negative cycle of thoughts with her undying sense of adventure. And she can always make me laugh.

Negative thought cycles have you trapped? Join Group Coaching next month. Each theme is aimed at helping you live your most joyful, intelligent, productive, and stress-free life. We’re kicking off in August and September with Joyful Productivity. Learn more or enroll now here.